Music can have a profound affect on my state of mind. I think this is true for most people, actually.

The therapeutic value of music has long been known to the medical world. Famed neuropsychologist Oliver Sacks used music to engage his patients (this was dramatized in the movie The Music Never Stops, where a brain-damaged patient is able to recall memories otherwise lost when he hears the favorite music of his youth). And I saw an article this week, courtesy of my BFF, which stated this:
One hundred years ago, Pennsylvanian surgeon Evan Kane penned a brief letter to JAMA in which he declared himself a rigorous proponent of the “benefit effects of the phonograph within the operating room.” To Kane, it was an optimal means of “calming and distracting the patient from the horror of their situation.” Of course this was before effective anesthesia so anything would have helped.

The article goes on to say that the connection between music and healing has been known, or at least reported, since 4000 B.C., and that a specific reference to music therapy was documented as far back as 1789. It also goes on to say that that surgeons have music playing in the operating theater about 70% of the time, improving task focus, lowering muscle fatigue and reducing stress.

The mp3 file, iPod and its mobile phone successors have made music accessible, personalizable and portable in a way it has never previously been. And as these technologies have become low cost, ubiquitous and customizable, the digital health movement has figured out a path for companies to turn music into medicine.

nologies is a company that attends Leslie Saxon’s USC Body Computing Conference. The company demonstrated the profound outcome they can have on patients with real patient videos and they engaged the entire audience of boring VCs and tech people and academics in a group sing-a-long of Blueberry Hill, demonstrating that their product actually makes people feel good. Needless to say they won the business competition, which was focused on the intersection of music and health and, interestingly enough, sponsored by headphones company SkullCandy.

Musical Health Technologies describes itself as “mobile technology, which digitizes the evidence-based music therapy practice of lyric prompting,” by which they mean they use the familiarity of lyrics and the way the brain reacts to music to deliver a therapeutic intervention. They are seeking to make music therapy not just effective (which is already well known medical fact), but scalable, which it has previously never been.

The company’s first product is called SingFit PRIME, and uses musically generated cognitive and physical stimulation to improve health and quality of life for people with dementia. Music-driven technology and tools are used by professional caregivers to engage patients in more than 60 senior-living communities. According to their website, clients’ professional caregivers report that residents with dementia experience elevated mood, decreased agitation and increased quality of life when they participate in three SingFit PRIME group sessions a week.

You really have to see SingFit in action to be moved  by the power of music and music therapy to engage otherwise less engaged individuals, particularly the way this company has made it work.  My favorite example is this

If you had seen the room I was in when I met these guys, which included a few hundred curmudgeonly middle-aged healthcare dorks singing their hearts out in unison to Blueberry Hill, you would understand why I am rooting for this company.

BioBeats is my other recent favorite on the musical healthcare scene. I met them at last year’s Computer Electronics Show when they were powering the music behind a digital health fashion show called Robots on the Runway. Let me tell you, if you haven’t stood next to a neon-lit swimming pool in Vegas with a million other drunk people watching robots move to a funky beat, you haven’t lived. It was like a scene out of the Jetson’s, brought to you by Tanqueray. Way too funny. But the cool part was that the DJ for said event was from BioBeats, which meant that the music was, in effect, biometrically crowdsourced from the heart beats of the audience as sent to the DJ in mixed form courtesy of everyone’s cellphone sensors. 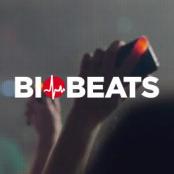 BioBeats “uses heart data to create and influence experiential music.” In other words, their app collects your heart’s signals via a phone sensor and turns it into musically-driven but health-relevant information in the form of music. Here is an excerpt from their patent: “BioBeats technology as discussed below help consumers to connect to their hearts by creating applications that turn heartbeats (or other biometrics) into music, as well as creating visualizations of heart health that are easy to understand. Each BioBeats user will get music relevant to their unique heart signature, but also a way to connect with other users’ hearts. Overtime, it is contemplated that BioBeats can make long-term statistical health predictions such as the onset of atherosclerosis, hypertension, or dangerous levels of stress.”

In English: they collect your heart data, run it through their HeartSong music generation engine, and output at it as a stream of music that helps you perk up or calm down, and tells you whether you should be calling 911 instead of Dr. Feelgood. According to a TechCrunch article about BioBeats, the company’s grand plan is “to use entertainment to facilitate the wellness process.” They have consumer focused apps and are working on one for hospitals. In a world of wearables where you can integrate biometric sensors and music generation (hello Apple Watch), this could be just the ticket to keeping the damn thing on your wrist instead of in a drawer.

I know, I can hear you singing it…”what’s the business model? How do they make money?” Well, I am not exactly sure, but I can tell you one thing: consumers will pay for music in a way they won’t pay for healthcare stuff. If BioBeats can actually get you to feel better and maybe even heal better, by driving the soundtrack of your life, they may just be on to something.